Home » Blog » public speaking » The Power of Finding Your Voice

I grew up in a very protective family.  As a child and young adult I was extremely introverted. My social skills were abysmal.  My parents tried to keep me safe from any conceivable harm. I remember trying to drive myself to a piano lesson alone and loosing the discussion with my mother. By doing this they also isolated me to the extent that I was uncomfortable talking to anyone outside my immediate family. I did not know how to make friends or connect with other people. The older I grew the more frightened I became of speaking to people.

When I was 19 my mother died and I went off to college. I was on my own for the very first time. That year I existed in a drunken haze as I tried to adjust to all the changes in my life.   By the end of the year I knew that I had to live differently. I realized how important it was for me to learn to communicate with others. I yearned to make friends and blend in with the crowd.  I remember giving myself pep talks as I walked across campus to build up the courage to smile and say “Hi.” On a very good day I might have even thrown in a “How are you?”

I became a Realtor right out of college at the suggestion of my husband. Having to drive people around in my car, show them houses and speak to them was excruciatingly painful.  My supervisor strongly suggested that I join Toastmasters and I’m grateful he did because it changed my life.

My first speech at Toastmasters was so memorable that, years later club members were still mentioning it. I walked up to the lectern, looked at the audience, opened my mouth, closed my mouth and then sat down.  I don’t remember what my evaluator said but I am sure he encouraged me to say a few words when I gave my next speech.  My club became a circle of friends who supported me thorough successes and failures. They pushed me towards new challenges by believing in me. I will always be grateful to them.

A few days ago I was standing before a small audience in a Minnesota library competing in the Humorous Speech contest and the Table Topics contest. I won first in both. It has been a long journey arriving at this point in my life.  I would not have been able to accomplish the skill and confidence to enter a speech contest without the generous encouragement of many Toastmasters. Every Toastmaster I have encountered has supported, mentored and encouraged me. They have influenced me in becoming the person I am today. 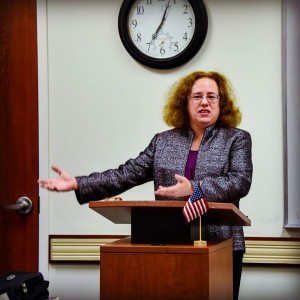 On my journey of learning how to speak up I was fortunate to encounter a group of mentors. Some of my mentors knew that I they were a mentor to me but many others did not.  I found that I learned something from everyone I encountered.  I saw and heard something I either wanted to emulate or something I knew to avoid in the future. The mentors I appreciated most were the ones who would give suggestions for improvement. I did not learn from the people who saidwhat a wonderful job I did and then not continue on to suggest something I could try in the future.

The second large leap in my journey of finding my voice was to learn to take up air space.  For too many years I would be silent while others voiced their plans, opinions or suggestions while I kept quiet. I assumed that they were more knowledgeable than I was.  What I didn’t realize until later was that they were also making assumptions about me.  They thought that because I kept silent that I had nothing to contribute. It wasn’t until I started to speak up that they began to respect me.

The third lesson I learned on my journey was to challenge myself. Once I had mastered something it was time to try something new.  If I was not constantly stepping into my uncomfortable zone, I was not growing.  I was not learning.  I was not gaining competence and confidence. Every time we challenge ourselves we become larger than we were.

I learned to challenge myself in Toastmasters. I learned to quit hiding and step into the center of attention. Toastmasters taught me to be a leader first through club officer roles and then as the area governor and then the district governor.  I learned how to train others and host contests.  I visited other clubs to support them as they reached for goals throughout the year. I shared the benefits of Toastmasters with others as I worked a booth at the state fair.

When I stepped into these roles people from many different clubs looked towards me for guidance. For the first time in my life I felt respected and competent. For the first time I felt free to express myself creatively without censoring myself.  I realized that over the years I had built a repertoire of strong skills. These skills benefited me but they also enabled me to help others. I gained the confidence to challenge myself farther.  I became a convention chair and organized the spring convention for the district. I never imagined that I would be able to do something so complex.  Now I use my skills to mentoring others.  I am thrilled as I watch someone bloom into a confident speaker.

If you are afraid to step forward and let others hearyour voice start with small steps.  Make yourself uncomfortable.  Look at the people around you. What do you admire about them? Bring that into your life and shape it so that it enhances your life. Find support.  There are people willing to help all around you. Weave a support network for yourself and you will be surprised how far you can journey.  I promise that when you find your voice you will become more powerful. You will find the confidence to adventure out to try things you never thought you would ever be able to accomplish.